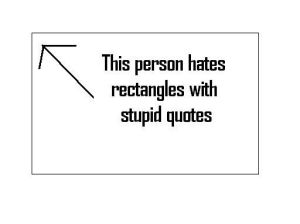 I don’t know the official name for these. Obviously I refer to them as rectangles with stupid quotes, although sometimes they are square instead. Whatever they are, they have taken over Facebook. If that is not bad enough, now they have overtaken Pinterest as well. Here is one if the latest:

Doesn’t look harmful does it? I mean, who is NOT against pet abuse? Anyone who abuses pets is probably not on Facebook or Pinterest. They are in some forum discussing how to commit unspeakable acts on animals. The problem here is the word “share”. Personally, I don’t feel compelled to “click share” to prove I don’t like to see animals abused, but at last count this had been shared 13, 684 times and has appeared on my news feed at least five.  The one that I crudely created and posted to my wall 2 hours ago has been shared exactly once.  I am beginning to see that this post has no real point except as an outlet for me to publicly bitch, so I will stop except for one more.

About rolling my eyes at the world

2 Responses to WHEN SHARING GOES BAD